'Hunger Games' To Blame For Jennifer Lawrence's New 'DO! 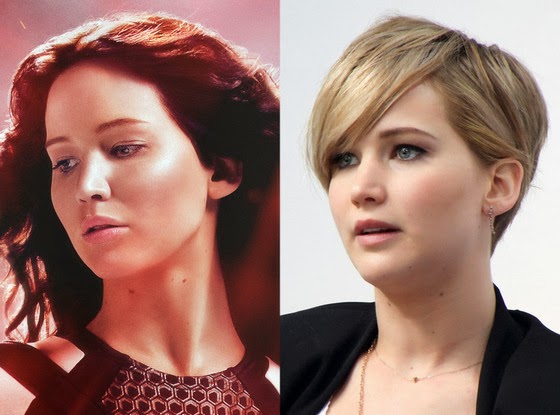 She was not just playing "Hunger Games" but it seems that when Jennifer Lawrence signed on for the role of Katniss, she played the hair games. The Oscar winner recently showed off a new and fun pixie cut, which some questioned if it was a wig; it's not. J. Law claims that by the time she made the chop, her hair could not get any uglier plus she was tired of always having to wrap it up. So, who is to blame for her supposed ugly hair?
"She used to give me a hard time about the hair because I was always saying, 'Dye your hair, dye your hair. We need your hair dyed, no wigs!' And then of course, dying her hair fried her hair, so she had to cut her hair," director Francis Lawrence tells E!. But Lawrence had no idea how bad the dying would affect the actress."At first I didn't realize it was messed up. I thought she was cutting it just to wear wigs to make me mad, but it wasn't the case. We actually fried her hair, which is sad. I feel bad." Now, the director has no choice but to let his star wear wigs as the short hair will not play a part on the future films. As you may recall, J. Law would be blonde on the red carpet then back to black for "Catching Fire." We love her new hair so we think that this may have been a blessing in disguise!