"How I Met Your Mother" Series Finale Highlights! 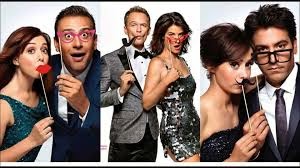 Tonight was the series finale of the long-running comedy "How I Met Your Mother" and after nine seasons, everyone was ready for answers. So, what did the finale teach us? We picked the top 10 things that really stood out (and will help you at the water cooler tomorrow at work):

Email ThisBlogThis!Share to TwitterShare to FacebookShare to Pinterest
Labels: CBS, Hollywood, How I Met Your Mother, Series Finale