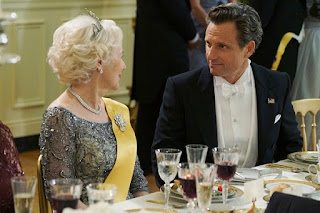 1.) Olivia and Fitz are together - We all expected this, but what we didn't expect was that halfway through the episode they would already be at each other's throats about a difference in opinion. As much as we would all love to see them live "happily ever after," I'm not sure it is going to be that simple.

2.) The story line was ripped right from the headlines - I know most of you probably realized the similarity between the case that they worked tonight and the Princess Diana accident. I think that they wrote this very well and in good taste. What did you think of tonight's story line?

3.) Where is Huck? - Apparently Huck has been hiding out in Olivia's apartment and when we get a look at him, he is looking pretty rough. He hasn't left the apartment and he looks like he hasn't slept in days. Later in the episode we see him go to Jake and ask for help getting his act together so he can go back to his family without feeling the way that he does.

4.) Who hired the killer in the case? - Everyone assumed that it was the Prince because he found out that his wife was having an affair with her bodyguard. However, it was the Queen who was the one who hired the killer. Why? Because she knew that the Princess was pregnant with his child and she couldn't allow a child that wasn't in the bloodline become an heir in the future!

5.) Last but not least, the secret is out! - Sally Langston decided that she was going to out Fitz and Olivia as a couple and also announce the end of Fitz's marriage to Mellie in the same breathe. She got her hands on video footage of Olivia in the White House after hours and photos of the two of them together!

I can't wait to see what happens next week on "Scandal" and you should come back next week to find out the biggest moments of next week's episode!