October 16, 2015
I can't believe what happened last night on "Scandal" and I can't wait to see what happens next week. I found myself wishing it was next Thursday as soon as last night's episode of "Scandal" ended and I know most of the fans were with me on that. If you missed any of it, keep reading to get all the details! 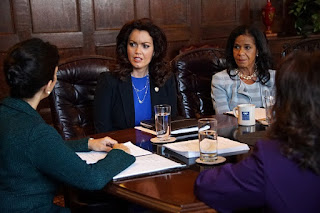 The first key piece of information that you need to know about is Quinn hiring Marcus, yes, Marcus! I couldn't believe it either and neither could Olivia when it was mentioned to her later in the episode. In fact, Marcus originally turns down Quinn's offer and that's when Olivia was told about it. After going back to the office from visiting Olivia, Quinn finds Marcus in the office making coffee. He is tired of the press just pulling the race card when it comes to Liv and just making her out to be this skanky woman. Later in the episode, Quinn, Huck and Marcus all do interviews on various news outlets, backing Olivia and after they are successful in this, Marcus asks who is going to tell Olivia he works there. This is my favorite part of the episode because we see the old Huck for the first time in a while when he says, "I will, I'm damaged. She doesn't like to yell at me."


Then there is the smear campaign that the press is airing about Olivia throughout the entire episode. Since Abby blew up her spot in the press conference last week, Olivia has been the center of the media frenzy and is even receiving threats online for her affair with President Grant. There is even a point in the episode where there is a paparazzi in a vacant apartment across the way from Olivia's and they are snapping pictures of her through the window. Huck took care of that by renting the apartment and he also helped her out with a months supply of burner phones so that the press couldn't harass her that way.

Mellie is called into her first Women of the Senate meeting and the topic of conversation is, of course, her husband. The women want to impeach Fitz, but Mellie tells Cyrus that she isn't going to go along with this. Cyrus then tells her that she should go along with the impeachment process because then Susan Ross will be made President and she will fail miserably and the people will force her to resign. She's a bit of a basket-case and wouldn't be able to handle the pressure. Mellie still doesn't want to do it and later in the episode, Mellie realizes that bringing Cyrus back was a mistake. He disrespected her dead son and she kicked him out of her office and he quit and left. This was after he pleaded with Mellie, trying to explain that Fitz was his heart and soul and his son in so many ways. I don't trust him.

Then if things weren't exciting enough, Jake and Charlie end up going to France to try and get more information as to why Lazarus 1 was deployed, which is what they are calling the fire at the Louvre. Charlie sets up a meeting with a spy he knows out there and when she gets to the meeting, she sees Jake and says no deal and walks away. Weird right? I thought so too until we found out that this woman, Alise, is Jake's wife who he thought had been dead for years! She is pretty angry with him, apparently they had a rendezvous point that she claims he didn't wait long enough at. Later we find out that she never showed up to begin with because there, "is no forever for spies." He then asks her to come back to the states with him so that they can be together. Wonder what Ms. Pope will have to say about that...

Finally, Fitz is confronted by a few of the Men of the Senate and they are threatening to impeach him if he doesn't do away with a bill he put into place. This is a bill that will be his legacy and he does not want to giev the other side what they want. He's also dealing with keeping things as normal with Teddy as he can as he and Mellie decided that they would go on with their lives but not hurt each other. Anyways, he tells them that he will think about it and then goes to Abby for advice. Even though he tried to fire her, Olivia told Fitz that she would have done the same thing Abby did. While talking to Abby, she tells him that doing away with the bill would be the "smart thing to do," but Fitz doesn't do the smart things.

This is where it got fricking' amazing! Fitz calls a motorcade and goes on an unscheduled trip, which we soon find out is to Olivia's house. Liv is literally watching this all go down on television and cannot believe what she is seeing. He gets off the elevator and Olivia asks him what he is doing and he responds, "I'm doing the right thing, I'm taking my girlfriend out on a date." They proceed to make out in the elevator on their way to the date and this inevitably makes Mellie really mad. Well he hurt her, broke his promise so now she is meeting with the Women of the Senate and going through with the impeachment!

Come back next week to find out what happens next week on "Scandal" and don't forget...DOG-WHISTLE POLITICS!