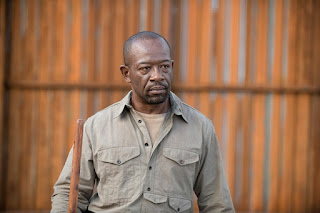 So much excitement on tonight's episode of "The Walking Dead"! I can't believe what happened and if you missed it, you are going to want to read this quick-cap!
The only thing that we found out tonight was where that horn came from that took the walkers off the course that the group was leading them on. You know, the path that leads them 50 miles away from Alexandria?
The horn was coming from a tractor trailer truck that was crashed into the new tower the group built so that they can see over the wall. This was purposely done so that they were left blindsided, the people who orchestrated this were none other than the Wolves! A group of them got into Alexandria and started killing off the people there, Carol and Morgan got most of them, while the other residents of Alexandria defended themselves against the others. Don't you worry your little heads though, no main characters were killed in the making of this episode!

Come back next week to find out what happened on the outside of the walls while the Wolves were attacking Alexandria!