Let It Snow With 'Tom And Jerry: Snowman's Land' Arriving In November 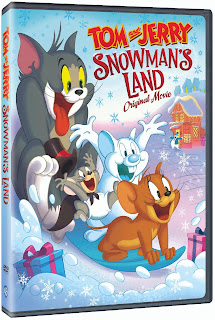 It’s The Most Wonderful Time of the Year

BURBANK, CA (August 30, 2022) – Just in time for the holidays, everyone’s favorite cat and mouse duo are back in action as Tom and Jerry: Snowman’s Land releases on Digital and DVD November 15, 2022 from Warner Bros. Home Entertainment. Produced by Warner Bros. Animation, the all-new, full-length animated family holiday film is filled with 72 minutes of toe-tapping tunes and hilarious hijinks and 3 classic episodes. Tom and Jerry: Snowman’s Land will be available to own on Digital for $14.99 SRP(US and Canada) and on DVD for $19.98 SRP ($24.98 in Canada).

It’s time to chase that holiday spirit with Tom and Jerry! With magic in the air, Jerry and his nephew, Tuffy, make a snow mouse that miraculously comes to life! To keep their new friend, Larry the snow mouse from melting, Tuffy and Jerry must race him to the fabled Snowman’s Village. In hot pursuit, Tom and devious Dr. Doublevay have their own plans for Larry’s magic. Get ready to go dashing through this epic tale filled with songs, snow, thrills, laughs and even a bit of holiday magic!​

Digital movies or TV episodes allow fans to watch a digital version of their movie or TV show anywhere, on their favorite devices. Digital movies or TV episodes are included with the purchase of specially marked Blu-ray discs. With digital, consumers are able to instantly stream and download movies and TV shows to TVs, computers, tablets and smartphones through retail services. For more information on compatible devices and services go to wb.com/digitalmoviefaq. Consult a digital retailer for details and requirements and for a list of digital-compatible devices.

Warner Bros. Animation (WBA) is one of the leading producers of animation in the entertainment industry, producing and developing projects for multiple platforms, both domestically and internationally. WBA’s current series include Animaniacs for Hulu, Batwheels, Bugs Bunny Builders, Gremlins: Secrets of the Mogwai, Harley Quinn, Jellystone!,Looney Tunes Cartoons, My Adventures with Superman, Noonan’s, Tiny Toons Looniversity, Tom and Jerry Time, Tom and Jerry in New York, and Velma for HBO Max, Teen Titans Go! for Cartoon Network. The studio is currently in production with New Line Cinema on the upcoming original anime feature film, The Lord of the Rings: The War of the Rohirrim. WBA’s full-length theatrical film, Teen Titans GO! to the Movies, was released in the summer of 2018. As home to the iconic animated characters from the DC, Hanna-Barbera, MGM and Looney Tunes libraries, WBA also produces highly successful animated films — including the DC Universe Movies — for DVD, Blu-ray® and digital media. One of the most-honored animation studios in history, WBA has won six Academy Awards®, 40 Emmy® Awards, the George Foster Peabody Award, a BAFTA Children’s Award, an Environmental Media Award, a Parents’ Choice Award, the HUMANITAS Prize, two Prism Awards and 21 Annie Awards (honoring excellence in animation).