Picking up where it left off, Scandal - Season 3, episode 8 opens with Eli in a cell with Olivia's mother. Eli let's her know that Olivia has been asking questions about her and as a result she is going to be shipped away to a hidden cell somewhere, in the middle of the night.
Maya asks Eli if she can just see Olivia once before that happens but he tells her it's not going to happen and leaves the cell as she screams after him. Now that Charlie has dirt on Quinn he wants to play it off like they are dating as a cover for her to go to work and report to him everything that she does during the day. Elsewhere, Cyrus lets James know that he has gotten him an interview with Daniel, the Vice-President's husband and James is elated. Little does James know that Cyrus is hoping Daniel will make a pass at him so that when James has it on the record, it can be used as blackmail to keep the Veep in line. Ultimately, the plan backfires when James realizes what is going on and ends up sleeping with Daniel. Back at Josie Marcus' house the team has gathered to deal with a break in that resulted only in the theft of Candace's laptop, leading Josie to conclude it was a political move made by her opponent, Reston. Later, while Olivia is home ignoring a phone call from Fritz, her mother is in her cell literally biting through her wrists to cut herself open. Abby asks David to do something about the theft of Candace's laptop to which he tells her its probably a run-of-the-mill theft and even then he would need probable cause to go after Reston for it. While the team is going through footage to find who killed the guard last week (Quinn), they turn on the TV to see that Candace has decided to go on the offensive by herself through a press conference. After the laptop turns up in Reston's office, it has of course been scrubbed clean. Everyone realizes that Candace pulled this stunt but Josie takes the blame and withdraws from the race rather than let her daughter take the fall. When Olivia finally takes a phone call from Fritz she tells him to stop calling and smashes her phone to pieces just to be safe. When the video of the guard turns up nothing of use Quinn is relieved, only to later go home and find Huck with the image of her that he really did recover from the tape. Since Olivia isn't taking Fitz's phone calls, he sends a helicopter to get her and bring her to Vermont. After she is done yelling at him, Fitz lets Olivia know that they are in the house that he has had built for the two of them and they end up sleeping together again. To cap off this crazy episode, Rowan learns that Maya has escaped from the hospital that was caring for her and we get to see Olivia turn around and freeze when she sees her mother standing right there, alive and well (more or less).
at November 25, 2013

photo courtesy of bravotv.com The new season of 'RHONY' begins on April 2nd and, after many hints of the new trailer droppin... 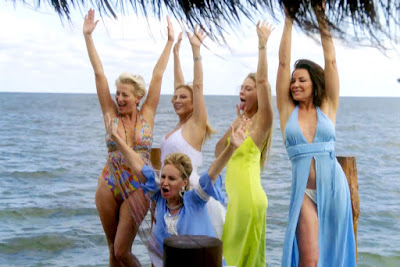