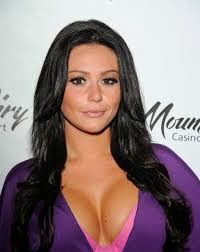 Jenni "J.Woww" Farley has announced that she and fiancé Roger Mathews will be welcoming a baby girl this summer. This is perfect since her best friend and "Snooki and JWoww" co-star Nicole "Snooki" Polizzi has a baby boy named Lorenzo. This is the second girl we have learned about this week as Kelly Clarkson revealed she's having a girl too. As you may recall, Farley has been super sick since she got pregnant and was put on special medication. We are so excited for her!