February 09, 2014
First we announced that Briana Culberson of "The Real Housewives of Orange County" was expecting a second baby; now we can share that another star of the show has something to celebrate. Kara Keough, daughter of Jeana, an original of the BRAVO franchise married NFL plater Kyle Bosworth. The duo married yesterday in Coto de Caza, where the show was meant to take place. According to the new Mrs. Bosworth: "It was so perfect. Best day ever!" The guests munched on In-N-Out Burger and Barbecue ate the reception held at the bride's mother's home. The couple have been engaged for a little over a year now and met when they were at UCLA (Keough transferred there from Berkeley) and even Bosworth is overcome with excitement! "My beautiful Wife! Perfect day love!" We are super happy for the newlyweds and wish them nothing but the best! 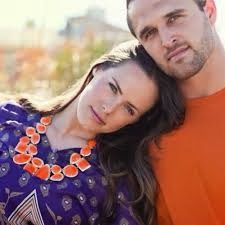