Jackson and April's Fate Is Revealed on "Grey's Anatomy" 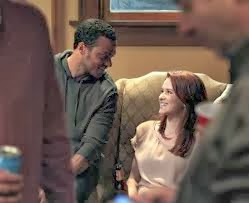 When we left Jackson and April on "Grey's Anatomy" back in December, he had interrupted her wedding. He professed his love for her despite her standing at the altar and his date being girlfriend Stephanie. In tonight's premiere, their fate was revealed and...April ran off with Jackson! On top of that, they got married! This is some fairytale $hit!!!
at February 27, 2014