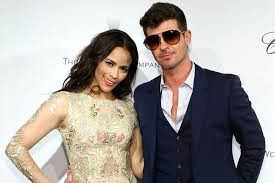 After his controversial MTV Video Music Awards performance with Miley Cyrus, many wondered if there was trouble in paradise for Robin Thicke and his wife. Both Thicke and Paula Patton claimed everything was fine in their marriage and that they were very happy. They even showed up at awards shows together. Now the couple, parents to a son, have announced that, though they still care for and respect one another, they have decided to separate. The "Blurred Lines" singer has allegedly been romancing other women, a claim he adamantly denied. We wish them the best during this trying time!