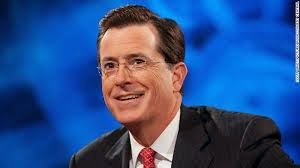 It's official: Stephen Colbert will be taking over "Late Night With David Letterman" as of 2015. We had a feeling it would be someone along the lines of Jon Stewart or such but are thrilled with this outcome.
"Simply being a guest on David Letterman's show has been a highlight of my career. "I never dreamed that I would follow in his footsteps, though everyone in late night follows Dave's lead. I'm thrilled and grateful that CBS chose me. Now, if you'll excuse me, I have to go grind a gap in my front teeth," Colbert of "The Colbert Report" had to say. So what does this mean for his long-running show on Comedy Central? That's still up in the air as in the start date and the locale for the new host, whom has signed a 5 year contract with CBS. Congratulations Stephen! At least David can rest easy knowing his show will be in very good hands!