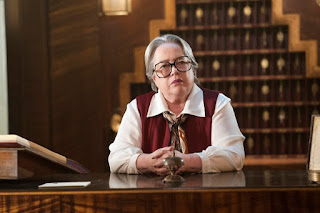 Last night's "American Horror Story: Hotel" started off with a scream, literally. Two blond women walk into the hotel and get a room, but they notice that the room has a really horrible smell. They seem to be sisters and one of the sisters notices that the smell is coming from the bed so the other grabs a knife and cuts it open to find someone living in it! They are then moved to another room and one of the sisters falls asleep. The sister wakes up to find the other sister on the floor of a closet being eaten by two ghostly looking children. Welcome to the hotel!

Cops and ambulances come, but it isn't for the sisters; it is for another room where a guy and a girl are nailed to the headboard of the bed. The girl is straddling him and there is an archery bow going through her to keep her upright. She is dead, he wishes he was because the killer cut out his tongue and his eyeballs and stuck them into an ashtray. They also found a tube of super glue at the foot of the bed and they realize that his penis is glued to the inside of the woman. I bet he really wishes he was dead now.

Now we have a junkie checking in and he gets room 64 for dirt cheap, while one of the detectives, John Lowe, from the other case gets a call from the guy who committed the second crime. He says he is doing it again the room 64 at the same hotel the junkie just checked into. When the junkie gets to the room, he immediately pulls out his heroin kit and gets it ready to go. That's when a demon looking figure comes into the room with a what seems to be a strap-on made of a spiral razor. The demon jumps on top of the junkie and you can use your imagination from there... When John gets there to check out the room, it's empty and he lays on the bed wondering what's going on. We then see that the junkie has been stashed under the bed.

We finally get our first look at Lady Gaga's character when her and her significant other show up to movie which is being viewed outdoors. They are able to lure another couple back to one of the rooms at the hotel for what starts out to be an orgy. It quickly escalated when her and her boyfriend stab the other couple in the throat and start sucking the blood. We then go back to the sisters from earlier in the show where they are being held in stand up cages and that's when, Iris, the front desk woman comes in and starts trying to force feed the women. It's some combination of stuff that is supposed to flush out the drugs in their system. Sally, a woman who seems to live in the hotel and has some influence on Iris, walks in and tells Iris to have some compassion.

She talks her into leaving the room and tells Iris she will take care of it. She opens one of the cages and lets one of the girls run and on her way through the hotel, Lady Gaga's character, known as The Countess, shows up and slits her throat. Iris is there when it happens and tells The Countess that she has no idea how she got loose and The Countess tells her it can never happen again. Detective John and his daughter are having dinner when John gets a text from his wife, Alex. It gives him an address and says "help me." He tries to call, but it goes to voice mail and when he gets to the address, there is another squad car outside. John instructs that officer to watch his daughter, but he doesn't do that. After walking into the house, John's phone rings and it's the killer from the case earlier that he was working on. He tells John that he told him he would do it again.

Meanwhile, John's daughter is still walking around the house and finds two men hanging by their arms from a canopy bed with their intestines hanging out. She lets out a scream and John finds her and gets a look at what she saw. We then get a switch in story line as we see a few years ago when Alex, John and their two kids are at an amusement park. He takes their son Holden to a carousel while Alex has their daughter Scarlet. Holden is taken off the carousel while John responds to a message on his phone. When we get back to present day, we see the Alex is ok, apparently the killer cloned her phone and sent that text message to him to lure him there. John is telling Alex that he is going to be leaving, but that Alex and Scarlet will have uniforms on them at all times. Alex looks upset, but she tells John that she isn't upset that he is leaving, but because she kind of wants him to go. She doesn't blame him for Holden, but she can't look at John without seeing Holden's face.

Back at the hotel, there is a real estate agent showing the place to a man named Will Drake who is buying the building. When they get to The Countess' room, Will's son, Lachlan asks if he can stay and look at her records while they finish the tour. The Countess says that he can and then brings him to this secret room off one of the hallways. The room has a few children in it and a bunch of video games and such. The Countess goes to one of the children and tells him to not be rude to their guest. His name is Holden and he is definitely the same boy from John's flashback. We end the episode off with Donovan, The Countess' boyfriend and Iris' son, leaving the hotel and she is worried about the hotel being sold. We then get a look at their past. Apparently, Donovan and Sally used to use together and Iris barges in telling Sally to call 911 because Donovan is passed out on the bed. She leaves the room and says she isn't calling because she paid too much money for her dope.

We soon see Iris push Sally out of a window on what seemed to be the 10th floor and when Iris gets back to Donovan, The Countess is sitting there with him. John is packing up and leaving while Scarlet is still sleeping. He ends up going back to the hotel to stay so this should definitely be interesting! Does he find Holden? Does he catch on to all the craziness going on in the Cortez Hotel? Come back next week to find out!