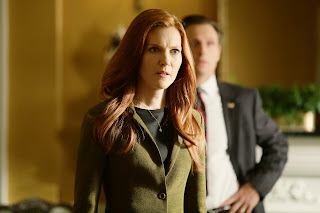 Tonight's episode of "Scandal" revolved around one thing and one thing only: what Mellie wanted from Fitz in order for Fitz and Olivia to be able to live happily ever after. If you have been a fan of this show since the beginning like I have, then you know that this is not going to happen without a fight. Keep reading to find out what happened tonight on "Scandal" if you are feeling scandalous...
At first, things seemed that they were going somewhere as Mellie called in Cyrus to help make her demands and Fitz agreed to the terms. She wanted one of the family houses, for Fitz and Olivia to stay discrete and she wanted his help on her campaign for President. He signed the agreement and then she decided it wasn't enough! Cyrus went to the President after Mellie told him to get her more and Cyrus told Fitz that the only thing that Mellie is going to go for is Fitz taking her back. Fitz gives her this heartfelt apology and talks her into doing an interview to tell everyone that even though Fitz had an affair, it was only a lapse in judgement and they are working through it. Just until the end of Fitz's term. That Mellie...I wonder if Hillary was at all like that? We know that Mandi only has the nicest things to say about Hill. This almost works, until Mellie is told by Cyrus that he is being played and she starts to believe it and bails on Fitz. That leaves a huge mess for the people at the White House to clean up and looking at the previews for next week, this mess isn't going to be easy to clean!

Come back next week for all the juicy details!