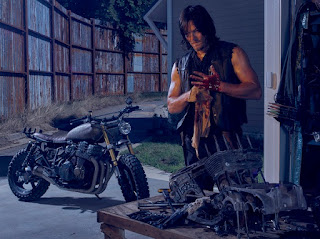 This season of "The Walking Dead" started off with the most epic premiere I have ever seen! It was a little hard to follow at first, but as it went on, the story lines really blended well. There were two different plots in the season six premiere and to get all the details, all you have to do is keep reading!
The two story lines were shown in bits and pieces throughout the episode and the only way we knew them apart was one was in black and white and the other was in color. That didn't stop me from getting confused a time or two, but it also didn't stop me from becoming glued to my television! It was like the "Wizard of Oz" with walkers...and Daryl Dixon.

The first story line that we followed was the one that took place right after Rick shot Pete for killing Reg. We watched as the community of Alexandria mourned the loss of one of own, well two of their own, but no one really liked Pete anyways. We also watched as Rick comes across a huge group of walkers in a quarry while he was burying Pete's body in the woods outside the community's walls. This leads us to story line number two that has been intertwined with the first.

The second story line shows us the plan that Rick and the rest of the people from Alexandria came up with to try and lure the huge population of walkers away from Alexandria. They used noise and another man-made wall to force them into the other direction and it seemed to have worked well and then...some walkers get through the wall. Rick tries to get Carter and Ron to kill them themselves, but when they panic, Morgan comes to the rescue.

The only other pieces of information that you will need to know about tonight's episode of "The Walking Dead" are Tara is alive and doing really well after nearly dying last season and Carter was killed in the process of implementing the plan to keep the walkers away from Alexandria. The episode concluded with the group continuing to lure them away from their homes when all of a sudden a horn starts sounding and it takes the walkers off the course. The walkers are now heading straight for Alexandria because that is where the horn is blowing from!

Who is sounding the horn? Come back next week to find out!