Hop Aboard 'Infinity Train: Book One' Coming to DVD This Spring! 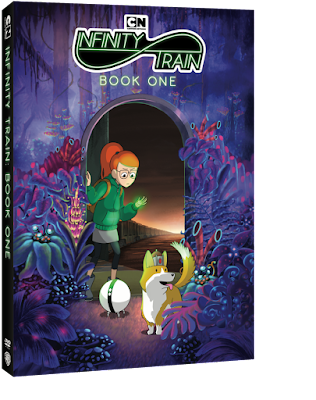 INFINITY TRAIN: BOOK ONE
Explore the Mystery on DVD April 21st
BURBANK, CA (February 5, 2020) – Created by Owen Dennis (former writer and storyboard artist from “Regular Show”), Cartoon Network’s mysterious and critically acclaimed series Infinity Train: Book One, will be released on DVD on April 21, 2020 from Warner Bros. Home Entertainment. Go on a journey with all 10 episodes from the first season and bring home some extra magic with over an hour of epic bonus features, including commentaries, documentaries, animatics, and more! Infinity Train: Book One DVD is priced to own at $14.97 SRP ($16.99 in Canada).
Join Tulip on a mind-bending journey aboard the mysterious Infinity Train, alongside her companions Atticus, the canine king of Corginia, and One-One, a robot with dueling personalities. With puzzles and perils awaiting them in every car, and the relentless Steward on their trail, will Tulip ever find a way off the train and return home?
“Developed through Cartoon Network’s award-winning Global Artists program, Infinity Train’s original short provoked immediate attention, garnering more than 5 million views on its YouTube page,” said Mary Ellen Thomas, WBHE, Senior Vice President, Originals, Animation and Family. “We know that fans are going to love the behind-the-scenes extra content, in addition to the 10 highly anticipated episodes from Book One.”
SPECIAL FEATURES

10 EPISODES
DIGITAL
Infinity Train: Book One is available to own on Digital. Digital purchase allows consumers to instantly stream and download all episodes to watch anywhere and anytime on their favorite devices. Digital movies and TV shows are available from various digital retailers including Amazon Video, iTunes, Google Play, Vudu and others.

BASICS
Release Date: April 21, 2020
Presented in 16x9 widescreen format
Price: $14.97 SRP ($16.99 in Canada)
Running Time: Feature: Approx. 110 min
Enhanced Content: Approx. 75 min
1 DVD-9s
Audio – English (2.0)
Subtitles – English
UPC# 883929705511
Catalog# 1000756892
About Warner Bros. Home Entertainment Inc.
Warner Bros. Home Entertainment (WBHE) brings together Warner Bros. Entertainment's home video, digital distribution and interactive entertainment businesses in order to maximize current and next-generation distribution scenarios. An industry leader since its inception, WBHE oversees the global distribution of content through packaged goods (Blu-ray Disc™ and DVD) and digital media in the form of electronic sell-through and video-on-demand via cable, satellite, online and mobile channels, and is a significant developer and publisher for console and online video game titles worldwide. WBHE distributes its product through third party retail partners and licensees.
About Cartoon Network
Cartoon Network is a division of WarnerMedia and the #1 global animated series network, offering the best in original content for kids and families with such hits as Ben 10, Craig of the Creek, Steven Universe, The Amazing World of Gumball, The Powerpuff Girls, and We Bare Bears. Seen in 187 countries, over 450 million homes and in 33 languages, Cartoon Network inspires the next generation of creators and innovators by engaging its audience at the intersection of creativity and technology. Its award-winning pro-social initiatives, Stop Bullying: Speak Up and CN Buddy Network are acknowledged and often used resources for kids and adults looking for tools that can assist in dealing with the ongoing issue of bullying.
WarnerMedia is a leading media and entertainment company that creates and distributes premium and popular content from a diverse array of talented storytellers and journalists to global audiences through its consumer brands including: HBO, HBO Now, HBO Max, Warner Bros., TNT, TBS, truTV, CNN, DC, New Line, Cartoon Network, Adult Swim, Turner Classic Movies and others. Warner Media is part of AT&T Inc. (NYSE:T).