'Impractical Jokers: The Movie' To Your Home EARLY! 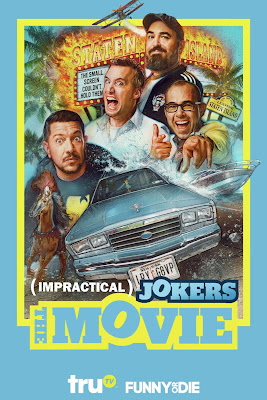 Following a Successful Theatrical Run, truTV’s First-Ever Feature-Length Film is Arriving Early on Digital
April 1
BURBANK, CA (March 27, 2020) Warner Bros. Home Entertainment is bringing the pranks into homes this April Fool’s Day with the early digital release of 'Impractical Jokers: The Movie' on April 1, 2020, only five weeks after its successful theatrical debut. The film, an extension of the wildly successful 'Impractical Jokers' series, was directed by Chris Henchy (Daddy’s Home, “Eastbound & Down”). A truTV original production and produced by Funny Or Die, 'Impractical Jokers: The Movie' carries a suggested retail price of $19.99 for the Digital ($24.99 in Canada) and is rated PG-13.
“'Impractical Jokers' raised the stakes bringing their hi-jinks to the big screen and we couldn’t be more proud of their impressive box office debut,” said Brett Weitz, General Manager for TNT, TBS, & truTV. “The unwavering support of their fans prove that this comedy franchise continues to provide endless laughs and entertainment that we are pleased to bring into homes.”

“'Impractical Jokers' first premiered on truTV to much fanfare in December 2011 and quickly became a hit, especially among young adults,” said Mary Ellen Thomas, WBHE Senior Vice President, Originals, Animation & Family Marketing. “The power of the loyal fanbase has proven the sky's the limit for this comedy franchise, and we are eager to bring home the laughter and antics of their first feature film for the whole family to enjoy.”
“For all our wonderful fans who've been requesting, we're happy to announce that 'Impractical Jokers: The Movie' will be available in your homes to watch digitally on April 1st”, said The Tenderloins. “Hoping we can provide some laughs to families and friends at a time when we can all surely use some.”
'Impractical Jokers: The Movie' stars James “Murr” Murray, Brian “Q” Quinn, Joe Gatto, and Sal Vulvano, also known as the comedy troupe The Tenderloins, playing themselves in a fictional story of a humiliating high school mishap from the early nineties. Featuring appearances from Paula Abdul, Jaden Smith, and Joey Fatone, the movie combines the fictional narrative with real life footage of over-the-top punishments and callbacks to classic moments from the series. Once the Impractical Jokers hit the road, they compete in hidden camera challenges for the chance to turn back the clock and find redemption.

MARKETING SUPPORT
The release of 'Impractical Jokers: The Movie' will be supported by a robust national publicity campaign; estimated to generate millions of impressions.

About truTV
truTV, a WarnerMedia Entertainment brand, is a bold, fresh entertainment network that gives viewers audacious content with laugh-out-loud moments and relatable characters. With millions of engaged fans across linear, digital and social channels, the cable network features a growing roster of critically acclaimed and fan-favorite, premium scripted, non-scripted and hybrid series, such as Impractical Jokers, Adam Ruins Everything, At Home with Amy Sedaris, I’m Sorry, Tacoma FD, The Carbonaro Effect, Paid Off with Michael Torpey, Hot Ones: The Game Show, based off the popular digital series, and more. truTV is also a partner in airing the NCAA Division I Men's Basketball Championship each year.
Website: www.trutv.com

About Funny Or Die
Funny or Die is a premiere entertainment brand and comedy studio that creates award-winning comedy. Known for its celebrity driven and political content, Funny Or Die reaches a global audience of more than 40 million people, and is the #1 comedy brand on both Facebook and Twitter. Funny Or Die's Emmy Award-winning long-form division produces shows like the critically-acclaimed Brockmire for IFC, Emmy nominated Billy on the Street, the Peabody award-winning American Vandal for Netflix, the Emmy nominated Sarah Silverman series I Love You, America for Hulu and No Activity for CBS All Access, and Between Two Ferns: The Movie for Netflix. FOD also makes award-winning TV commercials and Branded Content for all verticals and many Fortune 500 Companies from soft drinks to automobiles and toilet paper.
About The Tenderloins
The Tenderloins is a New York-based comedy troupe, whose four members – Joe Gatto, James Murray, Brian Quinn and Sal Vulcano – are the Creators, Executive Producers, and Stars of truTV’s hit series, Impractical Jokers. Now in its ninth season, Impractical Jokers follows The Tenderloins as they compete to embarrass each other while being filmed by hidden cameras, all the while showcasing their longstanding camaraderie. Their newest TV show - TBS’s “The Misery Index” hosted by Jameela Jamil - premiered as a top rated cable comedy in 2019 and recently wrapped production on its second season. In addition to TV success, The Troupe has toured steadily over the last six years with its wildly popular live show, performing for over one million fans in the US and UK, including six sold-out nights at Radio City Music Hall, a sold-out Madison Square Garden, and six sold-out shows at London’s O2 Arena. Natives of Staten Island, NY, Vulcano, Gatto, Murray and Quinn met while attending high school and later formed The Tenderloins Comedy Troupe in 1999. After years of performing live improv and sketch comedy, The Tenderloins crossed over to the web, garnering millions of views for their internet sketches, eventually creating the runaway success Impractical Jokers for truTV. In addition to success in the US, Impractical Jokers is the #1 show on Comedy Central in the United Kingdom and India.