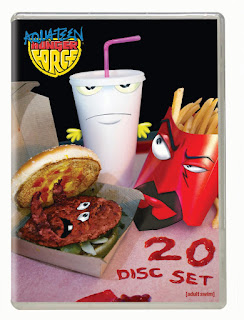 Includes ALL 140 Episodes from the Epic Series, Plus the First Theatrical Film, and All the Enhanced Content in a 20-Disc DVD Set!

BURBANK, CA (May 11, 2022) Hey Aqua Teen Fam! Everyone’s favorite fast-food trio from Adult Swim creators Dave Willis (“Squidbillies,” “Space Ghost Coast to Coast”) and Matt Maiellaro (“Space Ghost Coast to Coast,” “12 oz. Mouse”) are coming together for the first time on DVD from Warner Bros. Home Entertainment with a complete collection including all 140 episodes from the hit series 11 season run, as well as the first theatrical film titled Aqua Teen Hunger Force Colon Movie Film For Theaters, plus hours of bonus content. With over 30 hours of content to binge on, Aqua Teen Hunger Force: The Baffler Meal Complete Collection is priced to own at $112.99 SRP for the DVD ($129.99 in Canada). Aqua Teen Hunger Force is also available to own on Digital via purchase from digital retailers.

Three unique detectives, the Aqua Teen Hunger Force, share a rental house in New Jersey. This mystery-solving trio is comprised of human-sized food products: Master Shake, the big-mouthed, self-appointed team leader with a short attention span and no work ethic; Frylock, the only reasonable member of the group, who happens to be a box of French-fried potatoes--spuds with power; and Meatwad, a talented round mound of meat who can take the shape of a hot dog or an igloo. Together, this triple threat tackles unusual cases from the luxury of a neighbor's swimming pool--unless they're confronted by danger. Then, of course, the three run like hell.

Digital movies or TV episodes allow fans to watch a digital version of their movie or TV show anywhere, on their favorite devices. With digital, consumers are able to instantly stream and download movies and TV shows to TVs, computers, tablets and smartphones through retail services. For more information on compatible devices and services go to wb.com/digitalmoviefaq. Consult a digital retailer for details and requirements and for a list of digital-compatible devices.

Warner Bros. Home Entertainment (WBHE) brings together Warner Bros. Entertainment's physical and digital distribution businesses in order to maximize current and next-generation distribution scenarios. An industry leader since its inception, WBHE oversees the global distribution of content through packaged goods (Blu-ray Disc™ and DVD) and digital media in the form of electronic sell-through and video-on-demand via cable, satellite, online and mobile channels. WBHE distributes its product through third-party retail partners and licensees.

GKYAC’s mission is to be the premier global provider of kids, family, young adults, and classics content and brands. The group’s programming supplies unique and compelling content for HBO MAX, WarnerMedia’s direct-to-consumer platform. Uniting these award-winning networks and innovative brands helps maximize opportunities and growth potential, both as standalone businesses and as content generators, to drive and support its franchises, cross-studio initiatives as well as ratings.

Warner Bros. GKYAC’s content is currently distributed in 192 countries around the world and the division’s networks are in 500 million homes, delivered through more than 65 channels in 31 languages.

Adult Swim (AdultSwim.com), launched in 2001, is WarnerMedia’s #1 brand for young adults offering original and acquired animated and live-action series. Airing nightly from 8 p.m. to 6 a.m. (ET/PT) on its linear channel, and also available through HBO Max, Adult Swim is basic cable's #1 network with persons 18-34 and 18-49, and is seen in 94 million U.S. homes, reaching over 40 million viewers via HBO Max.