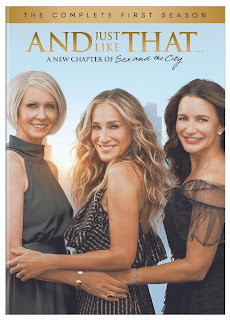 BURBANK, CA (October 12, 2022) – Get set for the highly-anticipated return of Carrie Bradshaw and her stylish, best girlfriends as Warner Bros. Home Entertainment releases the first season of And Just Like That…, the new chapter of the groundbreaking HBO series Sex and the City on DVD December 13, 2022. And Just Like That… The Complete First Season will include all 10 episodes of the show’s first season and is priced to own at $24.98 SRP. The series, which has been renewed for a second season, is also available to own on Digital via purchase from all major digital retailers and is streaming on HBO Max.

And Just Like That… The Complete First Season is available to own on Digital. Digital purchase allows consumers to instantly stream and download to watch anywhere and anytime on their favorite devices. Digital movies and TV shows are available from various digital retailers including Prime Video, Apple TV, Google Play, Vudu and others.

Warner Bros. Home Entertainment (WBHE) brings together Warner Bros. Entertainment's physical and digital distribution businesses in order to maximize current and next-generation distribution scenarios. An industry leader since its inception, WBHE oversees the global distribution of content through packaged goods (Blu-ray Disc™ and DVD) and digital media in the form of electronic sell-through and video-on-demand via cable, satellite, online and mobile channels. WBHE distributes its product through third party retail partners and licensees.